Back to gaming Incursion this coming month.We both want to try out new troop types painted over the last years and never played for the game.

Happy New Year to all !

What to do with an old used table?

Glue a game carpet on it and off you go!
Ideal for card and some boardgames.
at 3:22 PM 3 comments:

Round tabletop board - Scotland vegetation

Originally a 36" diameter board created for a "Dog Soldiers" game I did a few years ago. Perfect for any demonstration game as it catches the eye immediately. Hope you like it.

Email ThisBlogThis!Share to TwitterShare to FacebookShare to Pinterest
Labels: Events, L'âme de l'Ardenne, Lest We Forget - 1944

After being completely thrashed in an ambush by the Eschers, we played a raid scenario where the infamous girls were the attackers. My Spyrers had to defend a generator that contained some archeotech. The skirmish was set in a dome that contained long shadows, enabling models to run and hide in the same turn. The Eschers also had two infiltrators in their gang, perfect to engage my sentries in a quick manner. 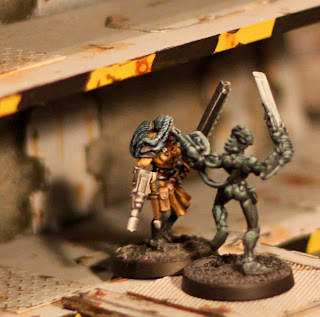 An infiltrated Anita charged the surprised Saïsha theYakara.  She could parry her assailant and survive the attack. 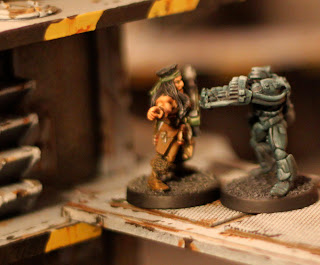 At the same time, another infiltration charge occurred.  Spirit, the Ratskin, also failed to win the engagement. Both sentries alerted, the alarm broke out. 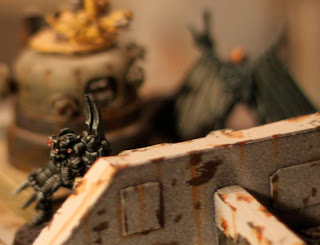 On top of the central building, the Spyrers taking position. 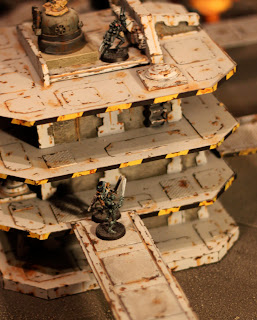 On a lower level the fight continued. Anita will be put out of combat and left knocked out on the ground. 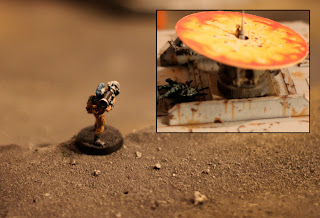 Renée, the Eschers heavy aimed and hit the objective with a frag missile, wounding the Yeld in the process. Luckily for him, he could take a blow and was only pinned. After the smoke cleared, the generator was unscathed. 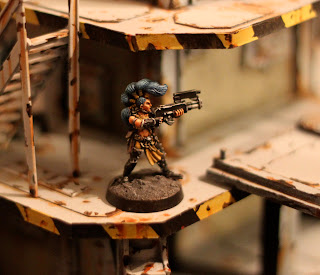 Nikita fired her lasgun to the coriaceous Yeld, but he took only a light wound.

Argus stood directly on his feet and returned fire. Under suppression, the Escher had to dive for cover. 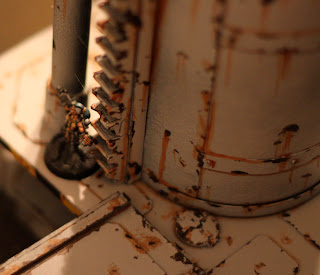 Rihanna failed her bolter shots on the other side. Things were not going as predicted for the Eschers. 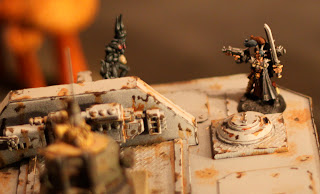 Kira, the gang leader, had went trough ventilation shafts and appeared on top of the central building. 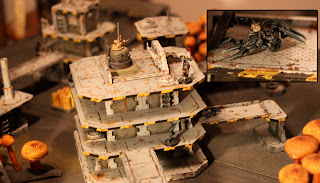 Her automatic pistol shots did hit the Malcadon. Dodging for the bullets he did fall two storeys lower.
Kira saw the rest of the Spyrer gang coming close for revenge. She did opt to live another day and fleed through the vents she came in, leaving the victory to the hunters from the Spyre.
at 4:11 PM 5 comments:

Email ThisBlogThis!Share to TwitterShare to FacebookShare to Pinterest
Labels: Necromunda

Due to a lack of space in my window and the fact I don't have the time to play LotR anymore (too much new projects actually), my Dwarf army is for sale. All 36 models are in white metal and they are all painted and based. The army contains Balin, 2 captains, 1 standard bearer, 6 warriors with bows, 4 warriors with shields and hand weapon, 2 warriors with 2-handed weapons, 3 iron guards, 9 khazad guards, 1 stonethrower with crew (2) and captain and 2 vault warden teams.

If you're interested or have any question, send me an mail at: ct-s@ct-scenery.com
Of course, feel free to spread the message. Thanks!

Email ThisBlogThis!Share to TwitterShare to FacebookShare to Pinterest
Labels: For sale, Lord of the Rings

After being completely thrashed with my Goliath gang, I thought it was the perfect opportunity to try something different: Spyrers. I didn't want to go too flashy with the colors and opted for a single dark turquoise choice, witch in my opinion gives a more "special suit" effect and contrasts well with the typical gang look.